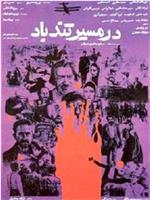 During the second World War Iran is occupied by the allies. Meanwhile Doctor Rastan is going to the Qashqaei nomads to treat his sister's husband. There he meets Amir Houshang the head of Qashqaeies and also Ghobad who is a villain. He returns to his **** Shiraz and finds that his younger brother Ali has killed the villain of the ****. Doctor with his brother Ali flee to the no...