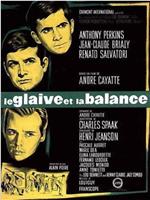 A boy is kidnapped and murdered on the French riviera. The police, who had watched the delivery of the ransom to TWO men gives chase once they determine that the boy is dead. The police never loses sight of the TWO men who flee on a speedboat and run into an old lighthouse after landing. However, when the police surrounds the lighthouse, THREE men come out, each one claiming th...